In this post, we will cover the origins of the first ancient African civilizations in every corner of the African continent. How did all start? The phenomenon known as the Bell-Beaker culture started to affect North-Western Africa. So called for their characteristic ceramic pots found in tombs, the Bell-Beaker culture is associated with the rise of a warrior mentality. The cave paintings of this period in Northern Africa portrayed animals but also put a new emphasis on the human figure, equipped with weapons and adornments. The proceeding people of the region of the Great Lakes in Africa settled along the eastern coast of the Mediterranean Sea in order to become Proto-Canaanites, who dominated the lower lands between the Jordan river, the Mediterranean, and the Sinai desert.

Recorded in the Neolithic rock, known as petroglyphs, and the megaliths in the Sahara Desert in Libya give light to the premature hunter-gatherer culture established in the dry prairies of North Africa during the Ice Age. The region where the Sahara is located was originally a great place for agriculture (around the year 4000 BC). Nevertheless, after the desertification of the Sahara, the establishment in North Africa was concentrated in the Nile Valley, where the Egyptian nomads settled the foundation of the Ancient Egyptian culture. Archeological discoveries show that the primitive tribes lived along the Nile long before Pharaoh rule began. Organized agriculture appeared around the year 6000 BC.

The oldest evidence of written history in Africa comes from Ancient Egypt, and the Egyptian calendar continues to be used as the primary source to date cultures of the Bronze Age and the Iron Age in the region.

Around the year 3100 BC, Egypt was unified under the first known Pharaoh, Narmer, who inaugurated the first of the 31 dynasties that divide Ancient Egyptian history into three phases: Ancient Kingdom, Middle Kingdom, and New Kingdom. The Pyramids of Giza (close to Cairo), which were constructed during the 4th dynasty, gave faith to the power of religion and Pharaoh rule. The Great Pyramid, which is a tomb to the Pharaoh Keops (also known as Jufu), is the only one of the Seven Wonders of the World that is in great condition. Ancient Egypt reached its height economically and territorially in the New Kingdom period (1567- 1085 BC).

The importance of Ancient Egypt in the development of the rest of Africa has been debated. Past western scholars generally saw Egypt as a Mediterranean civilization with little impact on the rest of Africa. Recent studies, however, have started to discredit this notion. Some have argued that various Ancient Egyptians, like the Badarians, probably migrated toward the north from Nubia. Meanwhile, others talk of a movement of great numbers of people around the Sahara before the beginning of the desertification. Whatever the origin of any people or civilization, it seems reasonably certain that the predynastic communities of the Nile Valley were essentially indigenous culturally, receiving little influence from external sources on the continent during the centuries preceding the beginning of historic times.

Just before the desertification of the Sahara, the communities that developed south of Egypt in what is known today as Sudan were fully a part of the Neolithic Revolution and they had a lifestyle between sedentary and semi-nomadic, being able to domesticate plants and animals. Megaliths found on Nabta Beach are examples of what probably were the first archaeo-astronomical instruments in the world, some 1000 years before the Stonehenge. This complexity, as was observed in Natba Beach and expressed through different levels of authority in within the society around the place, possibly settled the foundation for such a Neolithic social structure in Nabta as that of the Ancient Kingdom of Egypt. The inhabitants belonging to “group A”, who inhabited modern day North Sudan and were contemporaries of predynastic Naqada in High Egypt, were responsible for what could have been one of the oldest known kings in the Nile Valley, which the Egyptians called Ta-Seti (Land of the Arch). Their disappearance with the rise of dynastic Egypt later permitted the rise of kings like Kush, Kerma, and Meroe, which in conjunction they understood what is occasionally called Nubia. The last of them could have seen the final, devastating hit given by the leader of the growing reign in Ethiopia, Ezana of Aksum, effectively carrying the classical Nubian civilizations to their end.

Separated by the “sea of sand”, the Sahara, Northern African, and Sub-Saharan African have been connected by the fluctuating Tran-Saharan commercial routes. The histories of the Phoenicians, Greeks, and Romans in North Africa can be followed across the texts about the Roman Empire and of their provinces in the Maghreb, such as Mauritania, Africa, Tripolitania, Cyrenaica, Egypt, etc.

The regions around the Mediterranean were colonized and populated by the Phoenicians before the year 1000BC. Carthage, founded around the year 814 BC, grew quickly until it was unmatched in the Mediterranean. The Phoenicians submitted to the Berber tribes, which constituted the greater part of the local population, becoming the dominating part of the inhabitable regions of North Africa and finding a source of immense prosperity in trade.

For the first millennium BC, ironworking had been introduced in North Africa and rapidly started to expand across the Sahara towards the northern regions of Sub-Saharan Africa. Metallurgy started to become common in Western Africa in 500 BC, possibly after being introduced to the Carthaginians. Ironwork was established fully around 500 BC in Eastern and Western Africa, despite that in other regions, this activity wasn’t discovered until the first centuries of out era. Some copper objects originating in Egypt, in North Africa, Nubia, and Ethiopia have been found in Western Africa, dating around 500 BC, suggesting that the commercial connections had already been established in that epoch.

The Greeks founded the city of Cyrene in Ancient Libya around 631 BC. Cyrenaica was changing into a flourishing colony, even though being surrounded by deserts had little to no influence over the interior of Africa. The Greeks, however, they exercised a strong influence over Egypt. The city of Alexandria was founded by Alexander the Great in 332 BC and under the command of the Ptolemaic Hellenistic dynasty, he made attempts to penetrate south and, from this, obtained some information about Ethiopia.

Between the years 500 BC and 500 AD approximately, the Garamantes Civilization (possibly the ancestors of the Tuaregs) existed in what is today is the Libyan Desert.

The three powers, Cyrenaica, Egypt, and Carthage would end up being displaced by the Romans. After the centuries of rivalry with Rome, Carthage finally fell in 146 BC. Within a little more than a century, Egypt and Cyrene were incorporated into the Roman Empire. Under the dominion of Rome, the populated portions of the region were very prosperous. Despite that Fezzan was occupied by them, the Romans found the Sahara to be an impenetrable barrier. Nubia and Ethiopia were taken, but an expedition sent by Nero to uncover the beginning of the Nile failed. The greater extension of Mediterranean geographic knowledge of Africa was shown in the writings of Ptolemy (2nd Century), who predicted the existence of great water aquifers in the Nile, that commercial posts along the coast of the Indian Ocean in places as south as Rhapta (Tanzania) and he had heard of the Niger river.

The interaction between Asia, Europe, and North Africa during this period was significant. Some important effects include the diffusion of a classical culture around the coasts of the Mediterranean, the continued fighting between Rome and the Berber tribes, the introduction of Christianity in the whole region, and the cultural effects of the churches in Tunez, Egypt, and Ethiopia. The classical era came to an end with the invasion and conquest of the Roman provinces in Africa by the Vandals in the 5th century. The power of the region returned the following century to the Byzantine empire.

Around the year 3000 BC, agriculture arose independently in Ethiopia with crops like coffee, teff, finger millet, sorghum, barley, and ensete. The donkeys also were domesticated independently in the Ethiopian and Somalian region, but the majority of the domesticated animals came there from the regions around Sahel and the Nile. Some crops also were adopted in other regions in this epoch, between them one should mention the pearl millet, cowpea, peanut, cotton, watermelon, and gourd, same that started to be cultivated in Western Africa like the Sahel region while finger millet, pea, lentil, and flax were being settled in Ethiopia.

Ethiopia had a different, past culture with a historically intermittent contact with Eurasia after the diaspora of hominids towards the exterior of Africa. They conserved a unique language, culture, and cultivation system. The cultivation system was adopted in the mountainous areas to the north and it wasn’t applied to any cultivation in other regions. The most famous member of this system of cultivation was the coffee, but one of the most useful plants was the sorghum, a grain from arid soil; teff was everywhere in the region.

Ethiopia had a centralized government for many millennia and the King of Aksum, which developed there, had created a powerful merchant empire with trade routes that went to places as far away as India.

Historically, the Swahili people were found in places as north as Mogadishu, Somalia, and as south as the Ruvuma river in Mozambique. Although it was once believed that they were the descendants of Persian colonists. Ancient Swahili is now recognized by most historians, historical linguistics, and archaeologists as a Bantu people. 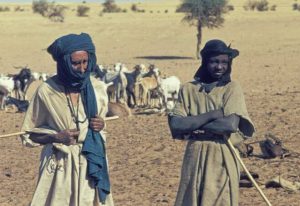 Through the year 3000 BC agriculture started to rise up independently in the tropical regions of Western Africa, where the African yams and oil palms were domesticated. No animal species were domesticated independently in these regions, although domestication propagated there from the region around Sahel and the Nile. Also, there were adopted crops of other regions in this epoch, such as the pearl millet, cowpea, groundnut, cotton, watermelon, and gourd, starting to be cultivated in Western Africa as in Sahel.

Around the year 1000 BC, the Bantu migrants had reached the region of the Great Lakes in East Africa. In the middle of that millennium, the Bantus also had settled in regions where Modern day Angola and the Democratic Republic of Congo are today. One of the major events in central Africa occurred during this period. It involved the establishment of the Kanem-Bornu Empire in what is today Chad. The Kanem Empire flourished in the later centuries, laying the basis for the emergence of future large states in the Sahel region.

The history of South Africa is still largely a mystery due to their isolation from other cultures on the continent. In 500 BC, this isolation came to an end with the settlement of the Bantu migrants in modern day Zambia. To the southeast, the Khoisans, also known as Bushmen, began the domestication of livestock and changed their hunter-gatherer lifestyle that had been the dominant style in the region since the beginning of time. The Bantus had arrived in South Africa, serving as the basis for the appearance.