Babylon was located in what is now the Iraqi region. To this land under the Sumerian control came Semite groups like Akkadians and Amorites, coming from a country called Martu.

In this article, we will see how art developed in the Babylonian ancient civilization.

Rollers and slats of mud baked with Cuneiform writing

During the first Empire, the production of rollers prospered. They were used to stamp printed documents and tablets of baked clay. Numerous texts produced in this method of cuneiform writing have been rescued, dating from the Babylonian culture. These texts have offered valuable information which explains certain aspects of their history, traditions, and culture. Many of these texts ended up in the hands of the Assyrians during their conquest of Babylon, who boasted about the number of texts in cuneiform writing that they possessed that they had managed to steal from the Babylonians.

In the cities of Mari and Ebla, more than 17000 clay tablets which provide data on trade and regional customs have been rescued. Through these tablets, we know that their major exported product was textiles and that large amounts of gold and silver that came from the taxes of the smaller cities that were under their domain were available to use in the maintenance of the cities, as well as by the army and to make military bells. The tablets also show us how they controlled the growth of diseases and how they were treated using natural resources.

The clay tablets found in Babylon also mention the persecution games that they organized to find escaped slaves, as well as the taxes they imposed to cross the river Euphrates. These ceramic tablets, which can still be found today in the Iraqi region, have offered information on almost all spheres of life of the Babylonian art and culture, but also offer general information on the Mesopotamian region, covering aspects including politics, economy, religion, medicine, music, poetry, dance and all other aspects of a culture.

Specialists work hard in a race against time to decipher, read and document this information properly. Tablets start to deteriorate rapidly when they are removed from their place of origin, where they have been used to being in specific physical conditions. The contents of the tablets are quickly copied to holographic prints, which allow the information to be digitized, which preserves the information without having to manipulate the original tablets. This information can also be sent to specialists around the world who give their valuable opinions in order to give it a multidisciplinary point of view.

Of all the works discovered, it becomes clear that their favorite topic was the legend of Gilgamesh, the hero of an old Mesopotamian epic poem, who is represented fighting with buffalos and lions. This popular theme in Mesopotamia is widely addressed in Babylon as we have previously seen in Sumer and Assyria.

When King Hammurabi died, his successors had to face the pressure of the Kasita tribes, who conquered the South around 1600 B.C., as well as the uprising of the South of Sumer and finally, the attack of the Hittites, sent by Murshil I.

After all these events, the first Babylonian Empire began to fall, and the Amorrite Dynasty was eradicated, causing the end of the first Empire. Shortly after followed a period of warring states, where the struggles for power and territorial control were continuous, with years of fights and plotting, mainly between the Assyrians and the Babylonians.

The Assyrians occupied Babylon for a relatively long period of time and the fights and the instability continued when the Chaldeans conquered Babylon’s cities. From this, the Dynasty known as the Chaldean or neo-Babylonian emerged, which is considered the final glory of Babylonian culture.

Although Babylon’s first period of growth before its destruction was very important from an architectural point of view, the neo-Babylonian period brought much variety and splendor in its artistic representations that would continue until the Empire fell. In this extended period that began in the year 2000 B.C., certain artistic advances were made that have great importance in art history, such as the improvement of the application of architecture of the arch and the vault, which had previously been used but was refined during the neo-Babylonian Empire.

In this era, Nabucodonosor’s magnificent palaces were built. Nabucodonosor was a renowned king of Babylonia who ordered the construction of numerous prestigious buildings. Furthermore, this king was rewarded great merit for the flourishing of Babylonia. He achieved things that other kings had not been able to do; we know this because testimonies have been found in clay tablets recorded in cuneiform writing.

The characteristics of art in Babylonian culture are closely related to the construction materials that were available to them. Stones were, of course, scarce but there was an abundance of mud and clay. There were hardly any big trees that they could use to effectively make beams in the construction of buildings. Following these limitations, their structures were mainly made of adobe and brick, cemented with stones, similar to the Sumerian method. Many of the grand palaces had arches and roofed vaults.

Adobe was used to build terraces and thick external walls. The walls were made of adobe or molded bricks (whose subsequent assembly made it possible to build gigantic walls with big ceramic embossments made of baked clay and pieces of stones containing embossments and inscriptions, which were known as Kudurrus).

Kudurrus were blocks of stones, usually black diorite, which were used to define the limitations of estates. They contained inscriptions which described the property’s boundaries and had terrifying spells which would apply to those who tried to change the boundaries. The Kudurrus of the Babylonian culture contained sculptures of the Gods or animals that represented the culture so they would appear more imposing and would defer perpetrators who tried to invade the property.

The Hanging Gardens of Babylon

There is a well-known legend about a tall building known as “The Hanging Gardens of Babylon” which seems to have been a building with a terrace which contained many plants. The gardens didn’t really “hang” in the sense that they were not suspended from ropes or anything of the sort.

It seems that translation errors have determined how the legend has been told throughout time. As there are no suitable records available, or at least ones that aren’t descriptions made by Greek historians, it still hasn’t been possible to clarify the true facts about this mystical building with a garden.

There is, however, an interesting description by the Greek geographer Estrabon. He described the gardens around the first century B.C. and wrote that they consisted of vaulted terraces raised one above the other and resting on square pillars. He also explained that these pillars were hollow and filled with earth in order to allow larger-sized trees to be planted. He added that the pillars, vaults, and terraces were built with constructed with baked brick and asphalt.

Recent studies conducted to find a possible correct location of the gardens have drawn new light on the fact that they were probably not in Babylon. There is still much work for the historians, archaeologists, and specialists to do in order to find out the truth about these mystical and mesmerizing gardens of Babylon that have held human imagination captive for centuries.

Characteristics of the Hanging Gardens of Babylon 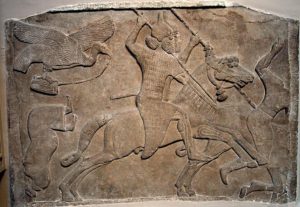 The structures they built had a simple design due to a difficult terrain and a scarcity of materials. The bricks used in the construction of buildings were covered with colored ceramic (baked and glazed clay) or with white stucco on which they painted frescoes.

It is amazing how these craftsmen managed to create such beautiful bricks in a process which they perfected so that the bricks sparkled in the light of the sun, leaving the spectator breathless.
If we take into account that the mixing process to make the blue pigments required rigorous proportion control (to the nearest millimeter) of the substances used, added to the fact that these mixtures were made in large quantities, always achieving the same flawless result, we can only wonder at the skills and knowledge that these craftsmen had in such ancient times.

They drew beautiful plants, some of them exotic, and fantasy animals where the artists’ imagination equaled to the stories of the legends. They also made geometric figures with designs that in some cases are slightly reminiscent of the legacy of the Sumerians with other new elements which adapted to the physical space that they decorated.

The sequential and narrative designs on the buildings whose fragments are still preserved have provided important facts about the history, traditions and the conception of the life of the Babylonian culture and of the Mesopotamian region in general.

The people of Babylon used a white stone called alabaster which is abundant in certain parts of the River Tigris, on which they carved embossments to decorate the most important buildings.

Cuneiform writing also often formed part of the decorations, adding to the narrative of the scene, and both methods adapted to space without any rivalry as the balance of the two reinforces the message and drama of the artwork instead of being detrimental to it.

Cuneiform writing also often formed part of the decorations, adding to the narrative of the scene, and both methods adapted to space without any rivalry as the balance of the two reinforces the message and drama of the artwork instead of being detrimental to it.

It is interesting how this ancient custom of presenting text alongside images has been used throughout art history by many cultures and still is present today. They placed slabs on the horizontal surfaces of their palace walls which related chronicles of the battles, victories, and hunts, as well as the tree of life which also appears on cylindrical seals, ceramic tablets, and stamps.

The concept of perspective was still quite primitive and the figures are not equally proportioned between objects and figures as they are in real life; this applies to both humans and animals. The artist generally made the most important characters bigger, for example, the figure of the King is the largest in the group, followed in size by the important figures that represent power after the King, and ending with their subjects.

Fragments of remains have been found of the painted decoration of the Mari Palace, which decorated the Audience Room, the Royal Patio and other rooms in the residence, and are important because they show four types of common scenes in Babylonian culture.

People’s heads are shown in profile even though the person is facing front-on (frontality). Their faces are inexpressive; as in the Sumerian culture and other regions in Mesopotamia. In many cases, these figures also have large outlined eyes. The presence of beards, long curly hair, embroidery on robes and fringing on dresses show a keen eye for detail, which also achieves quite a reliable representation of what things were like, contributing to a more effective communication which is surprising in its closeness to reality.

The topic of the embossments was almost always secular. The interior walls represented scenes that show the pleasant life lived inside the palace and the exterior walls showed scenes of hunting, battles, and told heroic stories that praised the King and epic legends. The ronde-bosse sculptures sometimes had giant proportions and were mainly placed at the entrance of the palaces, serving as guardians of the premises. They were figures where humans merged with animals, winged sphinxes, griffins, and lions, as can be seen in Assyria and Sumer.